Malwarebytes has just released their new stable version for about two months ago and now it’s releasing their new Beta version, the 2.0.2. It simply shows, how serious Malwarebytes is, not just for the protection that they are known for, but the company is also aware about the importance of User-Experience. 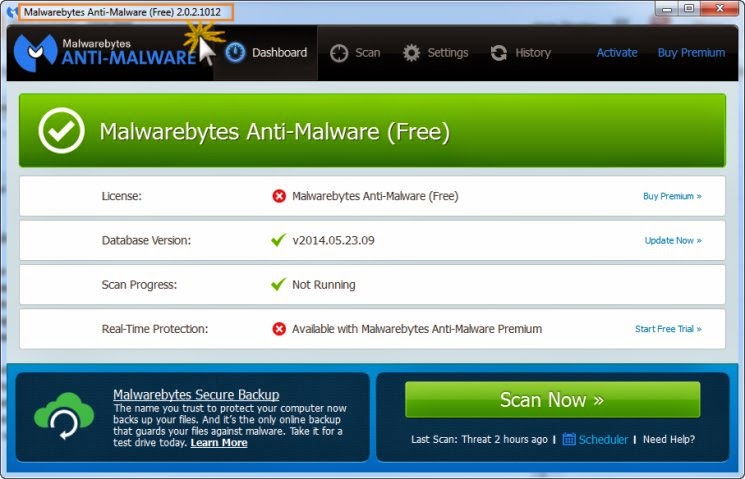 The changes of Malwarebytes, are not really visible if we look at the UI (User Interface). It’s just a minor improvements, but important. One of the changes is its terminology in scan results and logs which are now clearer. The other thing is the enabling/disabling of Malwarebytes self-protection, it is now more responsive than the previous version. If you found switching language hard in Malwarebytes, you don’t have to worry now. It introduces the list version of changing your desired language, currently it supported 30 languages worldwide. The flashing of the blank window on start-up and shutting down is now gone. Then, to simplify the user-experience, the main program now opens at the dashboard by default.

One of the most important fixes that Malwarebytes implemented in this Beta 2.0.2 version is the Rootkit scanning issues. As we all know not just Malwarebytes encountered such problem, but other Anti-malware vendors as well. So, in this version, the team of engineers makes it sure that the hanging-indefinitely while scanning for rootkits would never be an issue again. Plus, the speed of scanning is improved and the BSOD (Blue Screen of Death) problem has been resolved.

Among other issues raised and solved in this Malwarebytes 2.0.2 are VPN compatibility,  Protections failure upon upgrade, click accuracy in General settings, Access Policy Restrictions inaccuracy, Scanning failure in Manual scan, Malwarebytes Anti-Malware Update status indication, Exact Scan-time, Quarantined objects, translation now works on all UI language and the un-installation of the software is now perfectly clean, no leftover has been left behind to minimize the possible errors.

Upon testing, I scanned my computer for possible malware, the results are good, it detects all known malwares, as expected. However, after the scanning process it shuts down my computer automatically without any warning. Then, in start-up, the Malwarebytes 2.0.2 isn’t starting or protecting my PC. I think, the-shutting-down-after-scanning should be addressed, a simple pop-up for the user to decide, whether to restart the PC or not must be considered. And I would also suggest that Malwarebytes 2.0.2 free version must start with windows startup, by default.

Any suggestion to make this Malwarebytes better for next stable release?